Where goals was about determining what, in general, you are trying to accomplish, intentions are about specifying the specific version of how you plan to accomplish that goal.

Intention: The specific path you will take to accomplish a stated or perceived Goal. Often there are multiple intentions available for a single goal. 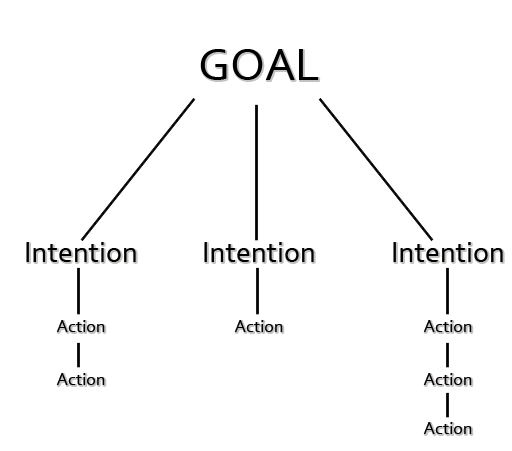 There is often more than one intention available for a single goal. Let’s say I want to turn on a light (my goal). One possible solution is to reach over and flip the switch, but I could, if I saw a friend pass by, ask him to flip the switch for me. The goal has remained the same, but the intention has shifted.

Or, to use a game example:

It must be noted, however, that the application of a semantic based approach to your designs can begin to lose its usefullness, when you get down to the layers; not because there is no value in this approach, but because what you are building changes so quickly, so often, and so discordantly, that it can be very difficult to maintain the same GOALS from day to day, let alone understand the intentions of your combat system. Moreover, it is often very difficult to truly understand your game from this perspective.

That said, there are still benefits. Defining the intentions of your game is a critical step in trying to understand the holistic knowledge requirements of your game.

Understanding what it means to provide Intentions to your player can be a bit confusing, so let's look at an example from a game that I am fairly familiar, God of War.

The following is the list of Actions that kratos can perform

This is a slight oversimplification. Do you list jumping and double jumping separately? Debatable. For now, though, let’s try and keep things simple. These are the mechanics that are built into Kratos, which, as you might guess, can be used to determine his combat intentions. Kratos’s goal is simple: kill his opponents. It is his intentions, however, where things are not so intuitive.

Seemingly, he has three or four intentions: normal attacks, special attacks, magic, and throws. Is that it? Yes and No.

Throwing works well as an intention, because it can be easily understood from the perspective of 'why', or Hollistic KnowledgeThe knowledge of WHY you would do something..

However, something like light attacks is more appropriately labeled as an action. Light attacks are a PART of an intention, while throwing IS the intention. Here is a better, but not perfect, list of intentions:

You will often hear people talk about the "verbs" of your game. Intentions, as you can see, are also clearly the same idea.