# The Value of Items

Every topic in the realm of Synthetic Economics is going to derive from the basic premise that you can assign value to things in the game. A sword has a value much like a skill has a value, and you can have meaningful discussions about the merits of choosing one over the other. For this to occur, however, you must overcome three major hurdles:

The answer to the first question is in the Production Function.

Production Function: This is a function that expresses how much someone can produce given their current Goods, Resources, Skills, and Knowledge with a certain amount of labor. For a game, this means how quickly they kill monsters, how quickly they solve puzzles, how easily they access new areas of the game, or how quickly they finish quests — all actions that grant them rewards.

That definition involves several concepts that we will cover, but the one we are focusing on right now is Value. Our first hurdle was "what things require us to define their Value", and the answer is anything that has an impact on the player's Production.

I cannot answer the question for you, because I don't know exactly what kind of game you are making. Instead, I can provide you with some questions.

This is not an exhaustive list, but it should get you started. With these questions answered, you're ready for the next of the hurdles.

Value is relative. If I tell you that the TNTeddy Launcher from Sunset Overdrive has a Value of $30,000, that is only because I have determined the general amount of $Money that will appear in the game. It would have been equally as valid to set the TNTeddy Launcher cost to $3,000, and then reduced how much money the player gets from different sources. It's entirely relative, and arbitrary.

However, the Intrinsic Inflation of the TNTeddy Launcher is always the same.

To determine the inflation of an object in your game you have to break down what attributes of that object have value. Or, more accurately, what components of its value do you want to care about, and have an impact in your game. Here is a real example that I pulled from the excel document I used balance the economy in Sunset Overdrive.

If you are wondering how the value that gets generated is nicely rounded and formatted, see another article, Calculating Nice Numbers

For each weapon that the player could purchase I tracked the category of weapon, the type of damage, and the 'Area' of effect for that weapon. Then for each of those properties I assigned it a Scalar value. It got cut off in the image, but I also provide a scalar to control the emphasis I give to each category. Lastly, I included a property "Pwr" which is another scalar based upon the relative power of this weapon versus the other weapons.

You might be shocked to discover how FEW properties I'm tracking. To that point, even though I have it listed, but I'm not using the clip size of the weapon in the final calculations. But that's because, to anyone who has actually played Sunset Overdrive, you'd realize how totally irrelevant that property is to the power level of a weapon. Again, you only need to track the things that affect it's Inherent Inflation in THIS game.

You can see at the end there are two very important columns.

To determine the final cost for each weapon I decide how much TOTAL money do I want the player to spend on ALL weapons, and then it's a simple matter of using the following formula:

The last step in the process is to determine that total value that you want. For Sunset Overdrive that was a laborious process of calculating all of the following:

Many of my answers to these were guesses -- very informed guesses, from hours of playing the game and writing down my notes -- but guesses all the same. For reference, here is another screen shot of the excel file for Sunset Overdrive. 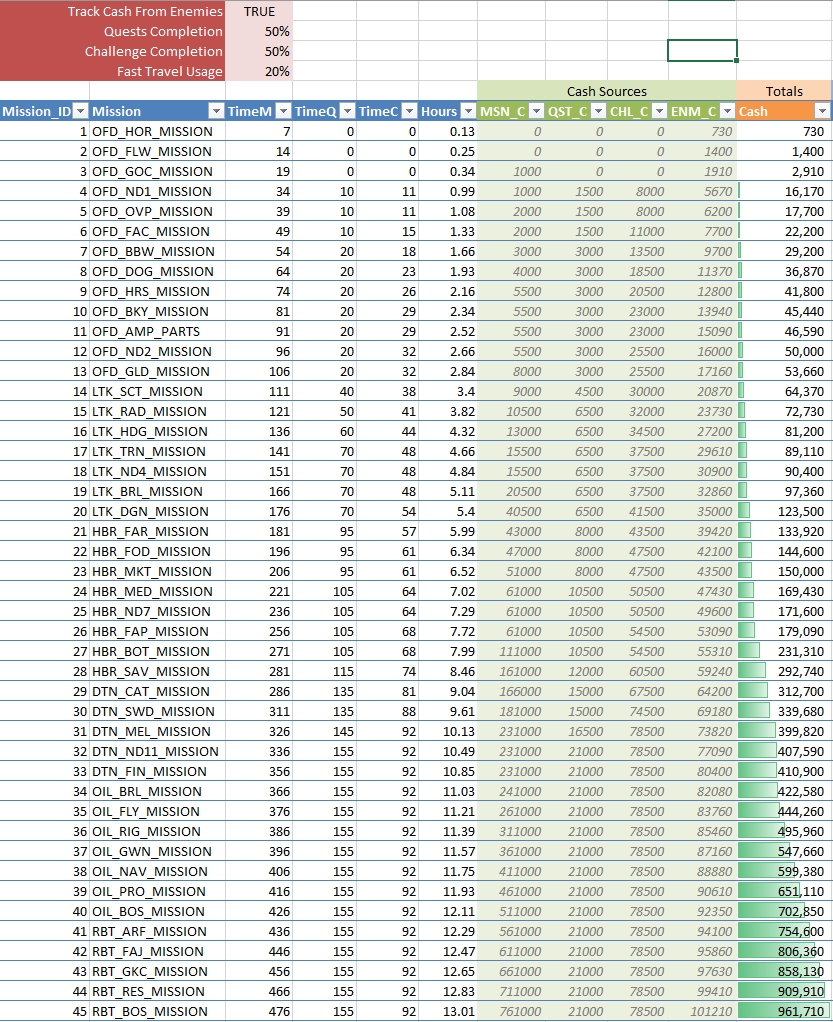 You can see in the final column, the total cash that this player who does 50% of the quests, 50% of the challenges, and only fast travels 20% of the time will be around $960,000. From this value I could work backwards and say that the total value of all weapons (that come from Vendors) should be $410,000.

What is very important to stress here is not the method by which I arrived at that number, but at the sheer number of variables that went into it. If, at any point, something was cut from the game (which is often), then that number would need to change. However, because my weapons are all having their values determined from a SINGLE number, it was very trivial for me to make adjustments.